Neither extreme temperatures, botched cake orders, nor vicious hornet attacks could keep SC3 down during our September 26th arcade party in Claremont. But they didn't exactly make things easy. Southern California's famous Santa Ana winds were responsible for 100-degree temperatures all weekend. Believe us, when your setup process consists of moving heavy '80s arcade cabinets around, you feel the heat. Still, the work was worth it; after all, it led to the SC3 debuts of Food Fight, Marble Madness, Pooyan, Asteroids Deluxe, and the rarely-seen Stern game Rescue. Our good friend Paul Dean braved the heat to bring us another game that had never been at SC3 before: the unusual 1988 shooter Assault. In addition to home consoles and multicarts, Mitch came through with Atari's black-and-white classic Football -- yet another SC3 debut. Paul also brought Donkey Kong and Warlords, which are always crowd favorites.

We had about 30 vintage coin-op machines this time around, and we probably would have had more if not for the hornets. They infested Steve's arcade storage facility. Steve braved the bugs armed with some anti-hornet spray, but sadly, even the bug-zapping skills he learned playing Centipede weren't enough to protect him, and one of the critters stung him in the back of the head. He recovered, but it cut down on the number of machines he was able to bring to the party. Where was Stanley the Bugman when we needed him?

And then there was the cake. If you've been to SC3 in the past two years, you know that a wacky, videogame-themed cake has become one of our traditions. This time, our cake celebrated the SC3 debut of Food Fight. The idea was to have a bakery "print" a Food Fight screenshot on the top, and then to build a 3D Charley Chuck and chefs out of marzipan. The ice cream cone would be portrayed by a piece of Japanese ice cream cone-shaped candy. All was going according to plan, but we were a little late getting our cake order to the bakery, who then promptly forgot that we'd even placed an order in the first place. In desperation, Geoff asked them to give us a solid black cake, and then painstakingly recreated the Food Fight elements out of frosting, food coloring, marzipan, and the cone candy. The end result probably turned out better than the original idea -- a testament to Geoff's artistic skills -- but it was nerve-wracking there for a while. We know expectations are high for SC3 cakes, and we didn't want to end up with egg on our face... although maybe that wouldn't have been that inappropriate, given the whole Food Fight theme. Oh well, it turned out fine, and marzipan is actually quite tasty.

The one thing we weren't able to adequately fix before the party was the big-screen video selection. Originally, we had planned to show a classic '80s movie in which an Atari 5200 game plays a central role. You know the one. Anyway, each organizer thought the other had it and was bringing the DVD, only to learn right before the meeting started that none of us actually owned it. To make matters worse, we didn't even have a DVD player, and had to rely to an eclectic mix of bizarre '80s videos and Japanese clips we had on a portable video device. It wasn't 100% videogame-themed, and for that we apologize. It won't happen again. SC3 is all about videogames, and only videogame videos will be shown in the future.

On a more positive video note, this party marked the premiere of the SC3 webcam. An archive of the September 26th feed can be viewed at justin.tv. This was our first experiment with webcams, and unsurprisingly we ran into a few setup and technical issues. Still, this idea has some major potential and we're hopeful to get some more comprehensive video feeds set up at future events. Keep in mind that what you can see on the archived webcast is but a tiny fraction of what SC3 has to offer!

Yes, there was plenty going on besides the Rock Band room and garage arcade you can see in the webcast. Mike from online auction site ChaseTheChuckwagon.com returned to SC3 carrying a parcel of vintage gaming goodies that were given away for free or raffled off to lucky winners. Congratulations, whoever won that Pac-Man lunchbox! Robert Bernardo of the Fresno Commodore Users Group attempted to show off Shredz64, the Commodore 64 version of Guitar Hero (yes, it exists), but found that nobody had a working C64 on hand. Undaunted, Robert hooked up a VIC-20 with multicart, giving our attendees a chance to play this underappreciated machine. Thanks, Robert! Home consoles seemed to get a lot of love this time. There was a constant steam of people playing multiplayer N64, SNES and Sega Saturn games. We had intended to get an 8-player Saturn Bomberman game going, but weren't able to locate a copy of the game in time. Luckily, people contented themselves with Twinbee and Bust-A-Move projected on a big outdoor screen.

Speaking of home consoles, we're very proud of SC3 member George "homerwannabee" Riley, who bested his own world-record score on Atari 2600 Galaxian at the event. You might have missed him tucked away next to the Turkey Shoot machine, but George played that game for something close to five hours, finally amassing a final score of close to 2,000,000 (he could have kept going, but he'd already topped the previous record by about 400,000 points and didn't feel the need to prove his point any further). Congratulations, George! Hector "FlyHec" Rodriguez, who was going for the NES Track & Field record, wasn't quite able to get into the groove, unfortunately. Better luck next time.

It seems like there was a lot of talk about high scores at this meeting. People were vying for high point totals on Mad Planets and Tron all night, and the machines were displaying crazy high scores by the end of the evening. All this action made all of us at SC3 feel that we had achieved our goal of bringing back the early '80s, if just for one night. We even overhead someone in the garage arcade saying to a friend, "This place is like a time machine, isn't it?" to which the friend readily agreed. Comments like this make facing all those hornets and 100-degree temperatures worthwhile.

The next SC3 meeting is tentatively scheduled for April 2010, although plans are really up in the air at this point. As always, keep an eye on our Future Meeting Page for details as they emerge.

A few of our favorite photos are shown below. If you'd like to see more, a bunch more pics can be found here. 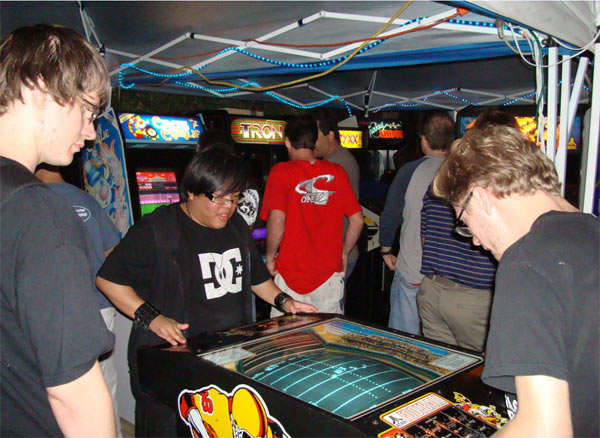 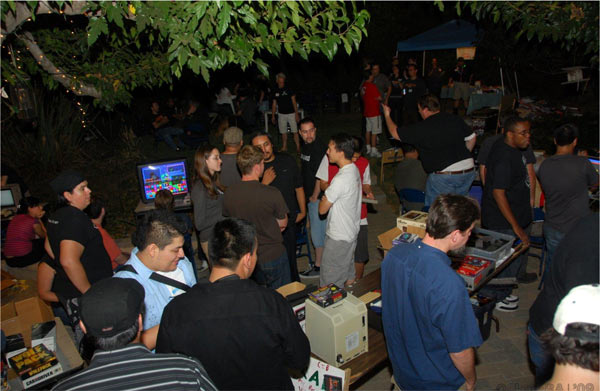 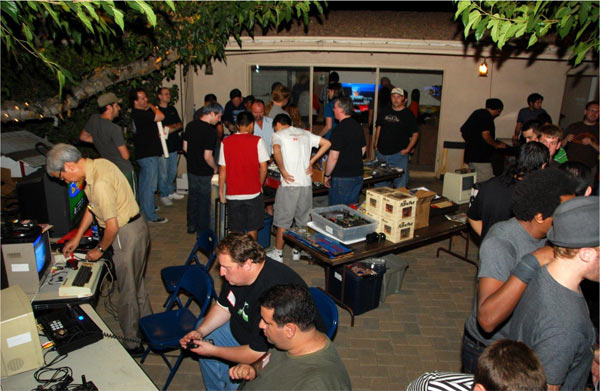 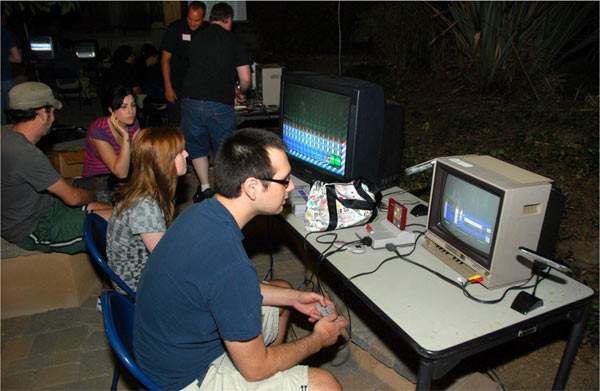 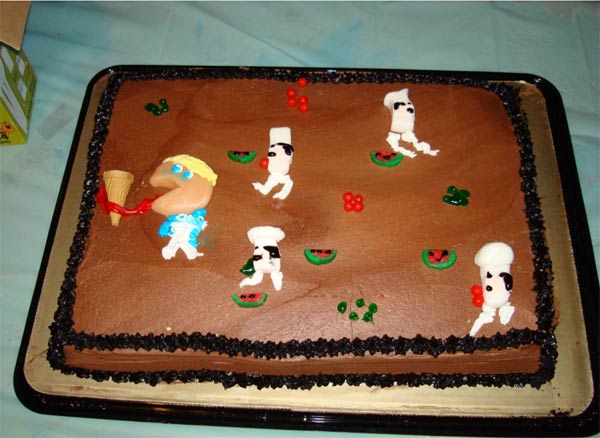