Near-freezing temperatures and the threat of rain weren't enough to keep 130 gamers from coming "Back to the Backyard" for SC3's latest arcade party on Saturday, November 10. After two successful but more formal events at an Alhambra gallery, the Southern California Classic Collectors decided to return home to a private backyard in Claremont, CA. Commercial venues and big events have their place, but sometimes lack that sense of "just a bunch friends getting together" that SC3 is all about. Well, we definitely felt that sense again at this event, and we think our attendees did too. It was good to be back.

But it was COLD. Thankfully, the rain that had fallen slowly but steadily throughout Southern California for two days prior stayed away on the day of the event. Temperatures were a different story. It dipped into the 40s at times – practically Arctic levels for those of us accustomed to SoCal's sunny weather. The chilly temps didn't seem to get people down though. They crowded into the garage arcade, huddled around the Satan's Hollow machine for warmth, or otherwise kept moving by running from the arcade games to the console games to the trade tables and back again. The cold contributed to the event breaking up a little earlier than normal – 11:30 rather than the traditional midnight – but that was OK since we had opened two hours earlier than previous parties. This schedule works well for wintertime events, and we plan to stick to it in the future.

Since this was our first backyard party in two years and the rain interfered with our setup plans, a few things went more roughly than we hoped. The biggest snafu was the last pizza pick-up we had scheduled for 10 p.m. Our designated pizza guy drove to the restaurant, only to find it was closed! By the time he got back, it was getting too late to devise an alternate pizza plan, so we kind of dropped the ball there at the end, food-wise, and we apologize. (But in our defense, who could have guessed that a pizza place would close at 10 p.m. on Saturday?!) We also owe a big thanks to Eric B., who helped us open the event by providing four pies from Petrillo's, one of the best pizzerias in the state. Our stomachs thank you, Eric.

We also had slightly fewer arcade machines than normal due to the threat of more rain. Luckily, Steve A. helped out a lot in that department by bringing a cabinet containing a Blue Elf multi-SNK cartridge. Kalan H. brought Satan's Hollow and Eliminator, an awesome vector game that had never appeared at SC3 before. Rik M. provided his usual complement of early '80s handhelds and a super-rare Adventurevision. Robert B. brought the Commodore love with an Amiga CD-32 and an MC-116. Of course our expected plethora of home consoles was up and running – 14 of them this time around. The cold didn't bother them one bit.

Games weren't the only attraction however. Director Jeff Von Ward showed his upcoming documentary film The Space Invaders: In Search of Lost Time, a fascinating look into the world of arcade game collectors (something we can relate to for some reason). How good is this movie? A crowd of people sat still, in metal chairs, in 40-degree weather, to watch it. And they came back to keep watching it after the projector screen got knocked over accidentally and the film had to be restarted. More information on the film can be found on its official site.

Thanks to Jeff and everybody else who brought games and supplies. We'd also like to thank all attendees who chipped in a few bucks to the kitty jar. Your contributions pay for this event and enable us to keep SC3 running smoothly. Special thanks to Ian W., who helped immensely during setup, teardown, and even during the event. His comfy-looking Tron hoodie was also an inspiration to all of us struggling to keep warm.

Despite the cold, the trade tables were hot. There was the usual action of classic cartridges and systems changing hands, in addition to a few choice rarities (someone had a boxed NES Donkey Kong Jr. Math for example). Some big items could be seen too, including a Steel Battalion controller and an X-Arcade panel. GameGavel was once again on hand, raffling off goodies ranging from a boxed Tele-Pong console to an Omnibot toy robot to the board game based on Sega's Turbo coin-op. As collectors, it always thrills us to see all the swag and all the other folks who want it. It was great to see it all back in the backyard. It felt good.

So just how eager were folks to attend this event? So much so that they kept showing up on Sunday... well, one of them, anyway. George R., one of our good friends and regular attendees, got mixed up on the date and arrived the day after the event, literally at the moment we'd just finished tearing down and packing up everything. He'd driven some distance to be there too. Fittingly, it was like the ending of a John Hughes movie from the '80s. We've even got the freeze-frame to prove it: 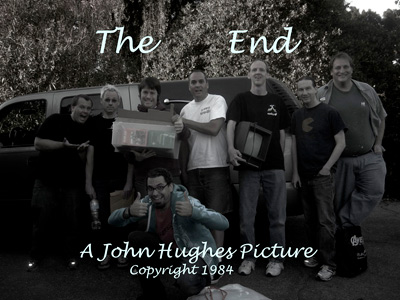 Sorry George!! See you next time! 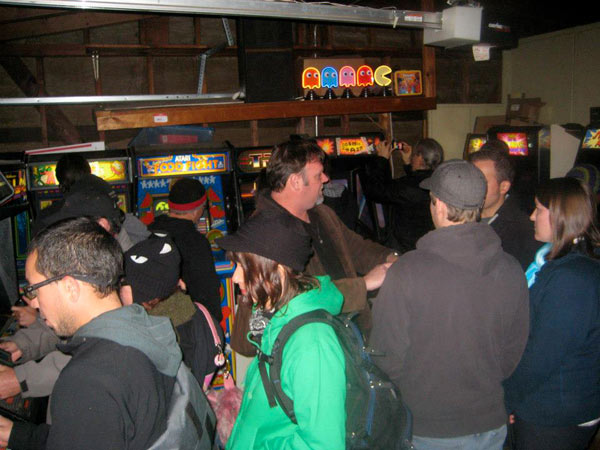 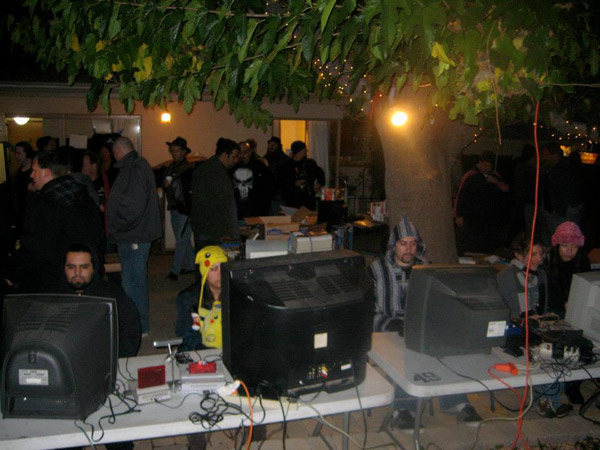 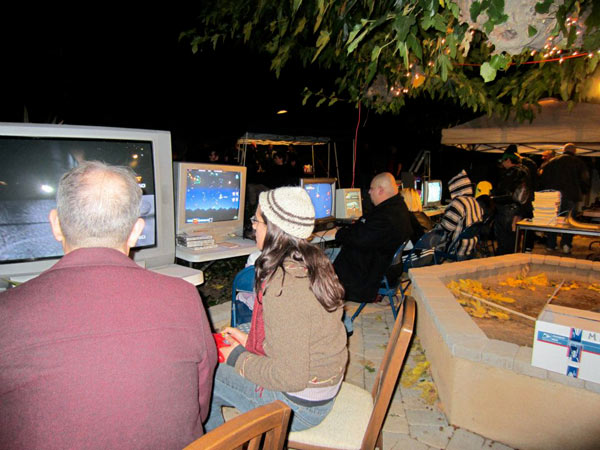 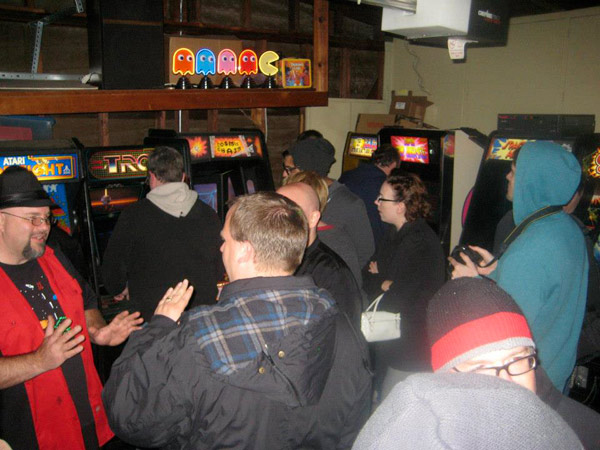